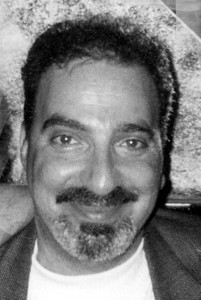 J. Ajlouny is the Director of literary and theatrical agency Mettle Management Co. LLC.  He was born in Detroit in 1958, the son of immigrants from Ramallah, Palestine. His father was a member of he US Army and served in Japan and South Korea during the Korean War. His mother, after raising six children, became a public school ESL educator. Both were active members of their church and community organizations. He graduated from Wayne State University in Detroit in 1979 with a B.A. in Journalism and was hired by London Arts, Inc, an England-based art gallery and print publisher as a writer and promoter of fine art and original limited edition prints and rare books and manuscripts. He attended night classes at Detroit College of Law (now Michigan State University College of Law) and earned a J.D. in 1983 but never fully engaged in the practice of law, preferring to make a career in art and literature instead. A series of opportunities followed which took him from the newspaper syndication business to book publishing and to a thriving literary and talent agency. In 1998 he incorporated these various concerns into an umbrella organization called the Federal Bureau of Entertainment. The principal focus of FBE was the development, production and staging of one-person stage shows featuring notable British actors whose performances highlighted important literary texts from Shakespeare to Orwell. Now in blissful semi-retirement, Joseph has resumed his writing career and is devoting himself to touring theater projects, research editing for database internet sites and topical writing on a broad range of personal interests . He is a Reader in History at the Library of Congress and the William Clements Library at the University of Michigan and serves on a number of community boards. He is currently chairman of the board of trustees of Ohana Gardens, a creative community in Highland Park. He resides in a 110-year old stately manor in Detroit’s West Village

Twitter: Joseph Ajlouny Purchase the author's books by clicking on the links below.

Marilyn, Norma Jean and Me (play)

The Trial of William Shakespeare (play)